There are several ways to tell how long someone has been into computers, and one is to watch how they react when they see a box with the Sun Microsystems logo on it. It doesn't matter if it's a server or a desktop, if they stare blankly at it, you know they're new to the business. You see, for those of a certain age, certainly those of us who graduated college before the millennium, the brand carries serious cachet. Back in the nineties, one of the computers on my "wants" list was a Sun workstation. And now, nearly a decade after they stopped making them, I have one. Sort of...

Let me start by explaining what a workstation is, as it may be a term you're not familiar with. A workstation was a machine that sat above what we call PC's. They were more expensive, more powerful and more reliable. I'll give you an example:

In the spring of 1992 Sun released a machine called a SPARCstation 10, and PC vendors started shipping their 486DX33 models, so let's compare the systems:

Let's look at the SPEC92 benchmark results, which show us integer and floating point performance:

Yes the numbers look more than an order of magnitude better for the Sun workstation, but even they don't tell the whole story. If the CPU on the PC was more powerful it wouldn't necessarily give better real world performance as the bandwidth of the memory and the disk is equally important, especially when dealing with large data sets as workstation users typically did, and those sub systems on the PC were as inferior as their CPU's. 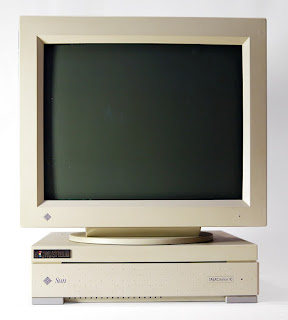 So what is a workstation? It's a machine that not only has fast processors, but also a large amount of fast memory that can keep them fed and a fast storage system for getting that data in and out.

Given the difference in price and performance of even the most high end PC vs a workstation, you can perhaps understand why having one on your desk was such a status symbol. If your employer bought one for you, you were doing important work and were highly valued. During the dotcom boom it wasn't unusual for job offers to include the promise of a Sun workstation on your desk as one of the benefits along with the inevitable stock options.

Workstations don't exist any more. High end PC's killed them off because Intel kept churning out ever faster processors at a rate that Sun and other companies couldn't keep up with until they were eventually overtaken. The memory capacity, bandwidth and disk storage systems in PC's have also improved beyond all recognition and the improvements just didn't come quickly enough to the Workstations. You could make the nebulous argument that they were more stable and reliable, but that wasn't enough to justify spending $50,000 vs $5,000. So workstations, as something different to what we know as a PC, disappeared. We now use the term to refer to any high end PC, often with the caveat that it has a higher number of CPU cores than the average machine, perhaps a Quadro video card and certainly ECC protected memory. But it's a fairly arbitrary distinction.

That said, the dilution of the term can be attributed to the likes of Sun themselves who switched to Intel/AMD processors in the mid 2000's and used off the shelf Quadro video cards but still referred to their machines as "workstations". 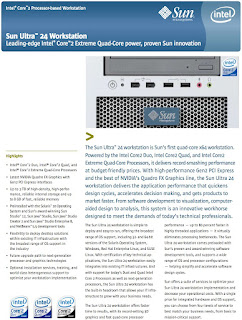 Which brings us to my Sun "workstation". Prices started at $995 and topped out at over $6,000, not unreasonable at the time for their specifications, especially when you also consider that even the lowest model included the all important Sun Solaris UNIX Operating System.

So let's take a closer look at the machine on my desk which shipped to its original owner with:

I'd been on the lookout for one of these on and off for over a year, but most were hundreds of dollars and/or in terrible condition with dents and scratches. I finally spotted this one and after a halfhearted bidding war paid just $70 for it.

The specification is not that bad considering it's 10 years old. The memory is about half what we'd consider a bare minimum these days, and the hard drive has the meager capacity of a modern entry level SSD but without the performance. But as this machine uses off the shelf parts, both can be upgraded extremely cheaply, 16GB of RAM would cost less than $20 on eBay, and SSD's or large capacity hard drives can be had for $60 in the unlikely event that you don't have any lying around. No-one is realistically going to game on this thing, so the GPU could stay if necessary. The processor is still fine for light web browsing, and I include watching 1080p YouTube videos in that, but realistically most people would want to replace the OS with Linux and a more up to date web browser to do so.

I on the other hand expect something a bit more powerful as my main machine in 2018, so I'll be replacing the entire guts of the machine, with the exception of the optical drive, with brand new parts. I can do this because, unlike other Sun workstations, this machine is built into a standard ATX form factor case.

I won't be running Solaris, rather I'll be dual booting Linux and Windows 10, so with non Sun hardware and non Sun software what remains is nothing more than a nice Sun case. However I don't feel sad or guilty about that as it was never a true Sun Workstation in my eyes, and if Sun could put off the shelf PC parts in it and call it a workstation then so can I...