Selecting my new laptop and moving away from Apple after 17 years... 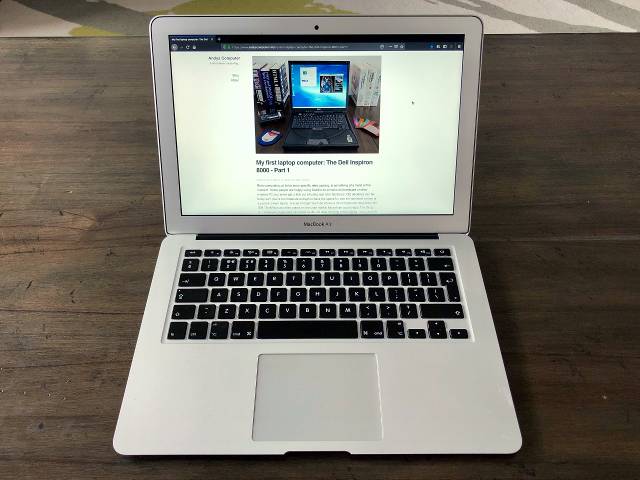 With the exception of some employer provided Windows based laptops, for the last 16 years I've only used Apple, and exclusively so with my own money. I started out with a 14" iBook G3, followed by a 14" iBook G4, then a 15" PowerBook G4, a 12" PowerBook G4, 15" MacBook Pro, 13" MacBook Pro and finally a 13" MacBook Air which I bought way back in mid 2013 and which holds the record for the longest I've kept any machine as a daily driver. But I've been considering buying a new machine for the last year and was holding off for a refresh on this ultrabook model before making any decision.

The new model was announced by Apple a couple of moths ago and for the most part it was what I had been hoping for, with two major caveats... Firstly, it was only available with a dual core i5 processor. I'd prefer a quad core or at the very least a dual core i7 at a good clock speed but that wasn't the worst thing, no that honor is reserved for the keyboard, which uses Apple's ultra short travel butterfly switch which provides no real feedback almost like typing a touchscreen. Being a touch typist who is at the keyboard all day, I'm extremely fussy about them and I simply can't stick with Apple given this direction they're taking and it causes me to prioritize fixing another more long standing problem.

I use Docker and other Linux software heavily as part of my workflow on my main machine, a desktop Linux system. While it's possible to run Docker and many other packages on OS X its not as straightforward and the installation and configuration is a different workflow with incompatible scripting across both platforms. In short, I should be using Linux on my laptop to create a consistent environment for maximum productivity.

So this is how my requirements shape up:

I don't feel the requirements are too exotic in this day and age, certainly higher resolution screens than I'm asking for must abound these days. Note that I don't care about touch screens or discrete graphics, neither would offer much benefit for my work. The same goes for finger print readers, I don't mind it having one but it's in no way a requirement.

I had done some research last year and a cursory look around shows not a lot has changed in terms of options. There are vendors who specialize in Linux laptops at least one of which offers an ultrabook (most are heavier slabs), Dell have offered a machine pre-installed with Linux for some time, and Thinkpads have excellent Linux driver support. I did consider the likes of the LG Gram which has received excellent reviews despite not being a brand I associate with quality. The Razer Blade was also in the running and I short listed some machines which checked most boxes and in other user reviews had no significant complaints about their build quality feel of their keyboards (although opinions on their layouts varied) and I colored in red the aspects that don't meet my requirements:

The main issues on both the Dell and the ThinkPad being that neither had on-board Ethernet so a dongle will be required which is not the end of the world, however it will eat into the available ports as will the fact that both only offer microSD card readers so there goes another port. On that note the IBM seems to have a better selection of ports than the Dell as well as slightly better battery life and lower weight, but it's $300 over budget while not meeting all my requirements. The Dell is also the only one to put the webcam at the bottom of the screen which is a no-no.

The port and webcam situation means the ThinkPad is the best choice, but I am wondering if I should consider different models by Lenovo or Dell, perhaps slightly larger and heavier units as I'm not getting what I want out of these impressively light machines. I'm not too sure of the Linux compatibility at least with Dell (although I suspect it's generally fine on mainstream business models).

So I took a look at two more unusual choices instead, a machine by a boutique Linux shop and another by LG whose new entry to the world of laptops which has been getting great reviews:

The prize for "close but no cigar" goes to the System76 machine which looks very similar to a MacBook Air and has fantastic specifications, ports and prices. But the battery life is laughable and as is the case with all these machines it's inside so you can't carry an extra one with you. It's such a shame the battery life is so bad as otherwise it looks like a killer buy...

The LG is so light I can get a 15" screen and still have less weight to carry than if I went with the 13" Dell. But it blows the budget and still doesn't even offer Ethernet. The 1TB of SSD storage is generous, but it's at SATA speeds which means it's slower and more dated than my 5.5 year old MacBook Air! The stranger part is that the machine does support NVME drives but replacing even one of the included SATA units would put me over budget. Then there's the keyboard layout which would be fine except they decided to include a number pad on the right, not a problem at first glance until you realize this means the main keyboard is now off center with the screen and track pad. A big no-no. There are cheaper 13" and 14" models that don't have the same keyboard problem, but these lack Thunderbolt 3, lose a USB port and only come with 8GB of RAM stock and with upgrades they'd top out at just over $1,700. Again out of budget and the port issues remain plus some quick research suggests that while getting Linux running is certainly possible it involves messing around with various firmware blobs and that doesn't sound fun. As a small player in the laptop market I do wonder what the community support might be like long term...

The Spectre looks like a great deal at the price (which included a $100 off promotion) really only losing marks for having the memory soldered to the motherboard so no future expansion. Again we have no on-board Ethernet and only a micro SD card. That presents a problem when there's only 1 type A port to play with. But a fianl nail is added to the coffin by the styling whose bright copper side trim and logo may appeal to many who like their "bling" but I'd prefer something more under-stated not to mention the fact I simply don't find it attractive. It's arguably a minor point given the great price and, according to reviews, performance.

The Razer machine gets top marks for style with its understated matt black aluminum finish, and it will likely perform well assuming it doesn't thermal throttle it's 4.6GHz CPU. This is another machine with soldered on memory however and again we see no Ethernet port and now no card reader either! Even living with the inconvenience of adapters it means there are no spare type A slots for me. Not good. The battery life is an unknown quantity as the machine has only just been announced and while Razer claim up to 13 hours their track record in this department has been pretty poor and I'd consider myself lucky if it manager the minimum 8... As an all-new model Linux support might be problem although the previous version worked pretty well out of the box from what I understand. The ports and battery life are the main stumbling blocks on this machine given its price.

Then I came across the chance to buy another machine that I had researched last year and that's what I ended up doing. This one checks all the boxes even if it is inferior on some of the specs above, it's also used, although very lightly, but this means it does benefit from a saving of a few hundred dollars off retail to sweeten the deal further. Fingers crossed it arrives in one piece and is as described...