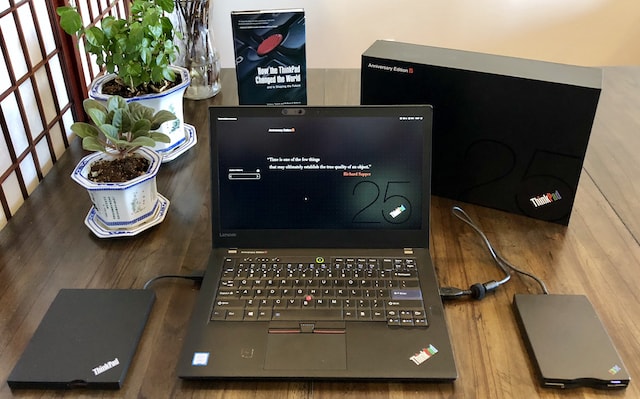 A couple of months ago I decided to replace my trusty MacBook Air with a Linux laptop. I had a bunch of requirements that I covered in a previous post, but I couldn't find any single machine that checked all those boxes. But then I remembered a machine that was released back in late 2017, the 25th anniversary Thinkpad. Truth be told I'm no ThinkPad fanboy and at launch it was somewhat overpriced for the power on offer but it does have a lot going for it at least as far as my requirements, with one feature that is practically unique.

I've highlighted the specs that don't meet me requirements in red, but as you can see it's a much better fit than the machines I previously looked at:

As you can see, aside from the price which was higher than the $1,500 I was aiming to pay and not really acceptable given the dual core processor, everything else I was looking for is present and correct, especially the ports and upgradability. What sealed the deal however was the price I actually paid... This is my first used laptop, but it was very lightly used indeed. Someone had purchased it to review and then sold it on when the next new toy arrived just 4 months later. So I got the balance of the 3 year warranty and a flawless machine with the box etc for $1,500. With that in mind the only thing on my list that I didn't actually get is a quad core processor which was something I agonized about before pulling the trigger, but as this isn't actually my main machine and I don't intend to do any heavy lifting on it I don't notice any difference.

So let's take a look at "the good" with regards to this machine...

For a non unibody Apple laptop, the build quality is excellent, it's extremely quiet and fairly compact and light. In addition to the ports and features listed above it has a special feature that I didn't mention, and that's the keyboard. I bought this laptop primarily for the keyboard which is full sized, has a mostly sensible layout and even prioritizes things like the function keys, requiring you to hold down a button to use them for their "special functions" instead of needing to do so to actually use the function keys. And yes, there are actual function keys instead of doubling them up on the number row. The keys are not chiclet style either, they're old school style with no gaps between but with sculpted caps.

Another benefit of Thinkpads is Linux support which is critical to me. With the exception of the fingerprint scanner everything worked out of the box on Mint 19 and I even dual boot it with the factory Windows 10 installation after disabling secure boot in the BIOS.

As a general purpose machine the overall performance is excellent, despite only having two CPU cores. The hard drive is an NVMe model and is also user upgradeable as is the memory, and Lenovo only used a single slot to furnish the machine with 16GB, so upgrading to 32GB is a cheap option, no need to throw away the RAM you already paid for.

In terms of the display, you get multi touch and 1080p resolution, the latter of which is a good match to the 14" screen size as far as I'm concerned and the display is powered by a dedicated Nvidia graphics card to boot.

The port selection is very generous by todays standards and if you need further ports at your desk it's worth noting that this is one of the last Thinkpads that supports a real mechanical docking station instead of a thunderbolt hub. I grabbed a refurnished example of the "ultra" version of this dock under $90 on Amazon which furnished me with an additional 3x USB 2.0 ports (1 with always on charging), 3x USB 3.0 ports, Gigabit Ethernet, 2x DisplayPorts, 1 x DVI-D port, 1 x HDMI port, 1 x VGA port and a combo 3.5mm stereo audio and microphone jack, not to mention an additional charger so the original can stay in my bag. It's worth noting that charging can also be done via USB-C and works well via my Anker 45W model.

So what about "the bad"?

Well, the CPU is a 7th generation model which was at the end of its life when this machine was launched. The dedicated GPU is a GeForce MX940 when they really should have used an MX150 at that time. The NVMe SSD runs at PCIe x2 speed, not x4 speed so is not bleeding edge although I doubt anyone would notice. But for my use these are minor quibbles. In reality there is very little performance difference between a 7th and 8th generation CPU, but the 2 extra cores would have been appropriate for the original MSRP. I'm also not a fan of touch screens as they affect the screen brightness considerably, and the panel used by Lenovo is particularly dim. Many people might not notice, but when you're used to the blindingly bright Retina units used by Apple the difference is obvious. I can live with that, but there is one aspect that is problematic: the battery life.

The machine has a small built-in battery and also uses a second small hot-swap battery. It's good that it's hot-swap as you're likely to need that facility more frequently than you might like. Under Windows 10 it struggles to hit 8 hours and under fairly heavy use on Linux I tend to see closer to 4. Now, the Linux performance being so bad is not a Thinkpad problem, that's just Linux, it's an area that desperately needs improving. But again, for the specification, price and size the battery life even under Windows is poor and something I'd expect to see 10 years ago. The good news is that a larger battery can be fitted, but this is an additional expense and it sticks out of the bottom of the unit and will probably only give me another 2 hours or so on Linux. I never used to carry my MacBook Air charger with me, even for a whole day of use away from home as it had 12 hours worth of stamina, and even the 15" MacBook Pro issued to me by my employer with it's quad core CPU, faster SSD drive and infinitley brighter and higher resolution screen manages 8. But I am going to lay some of the blame at the feet of the Linux OS. If that could at least match Windows I'd be happy enough.

The need to carry a (compact) USB type-C charger with me is not enough to sour me on this machine though. The workflow efficiency I get from using the same OS as my primary desktop and the ease of installing, maintaining and using open source packages and package managers is worth the trade off, not to mention the joy that is the keyboard vs the latest offerings from Apple. I feel Apple have made the best general purpose laptops for the last 20 years and frankly I feel they still do. But for my needs, today, I think I've made the right choice.
computer laptop lenovo notebook thinkpad