September 06, 2021
With smartphones having excellent video recording capabilities, and being always with us, it's easy for everyone to record their own video footage and share it easily with friends and family or even share it with strangers by uploading it directly to a site like YouTube. Of course, it wasn't always like this... Before smartphones we would have been carrying a dedicated video camera of some sort and for the longest time, essentially up to the mid 2000's, they would record to some type of magnetic tape and getting the footage off that tape and onto your computer so that you could edit and share it was complicated and time consuming. Enter a new company called Flip Video in 2006...
Flip video realized hardware video encoding chips and flash storage has finally come down enough in price that you could produce a low cost video camera that recorded directly to it. They also figured out that plugging it in to your computer via USB2 would be a quick and easy way to transfer the created movie files to your computer. The low cost part was important as the quality of the video produced would be low, 640 x 480 pixel "VGA" resolution, but that was ok because that was about all most computers could cope with and 1280 x 1024 LCD monitors were still fairly common. If you had a 1080p monitor you would have been something of a baller back then. The files would also be small enough that they could be uploaded to one of the new video sharing sites that were popping up, namely YouTube which had launched in 2005 and allowed clips of up to 100MB which at 640x x 480 amounted to 3 minutes or so... 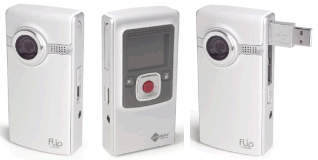 The camera launched at $149 with 1GB of flash storage which would give up to 30 minutes of recording time and was powered by two AA batteries. There is a 1.5" rear screen, not widescreen I hasten to add, and neither is the footage recorded, and no optical zoom or image stabilizer so for best results it should be used on a tripod. At this price point the small image sensor is not especially light sensitive and the lens is mediocre which means you need plenty of light to get good footage.
It very quickly became the best selling video camera on Amazon due to its price and ease of use and the ability to easily upload footage to the nascent YouTube and many big channels today can probably trace their roots to one of these cameras in their earliest days.
I picked one up off eBay, lightly used in box with all accessories for $20 shipped and was pleased to find that it still works perfectly. I uploaded some test footage below, just be sure to watch it in its original 640x480 size, not full screen.

Image quality when used on a tripod is acceptable as long as detail is not needed:
Close-ups are not possible due to fixed focus. Dynamic range is limited:
The lack of an image stabilizer means handheld shots (panning or stationary) are less than optimal:
flip ultra retro video camera